The SDGs’ promise to ‘leave no one behind’ brings with it an imperative to involve marginalized individuals and communities in development initiatives. Collective intelligence methods like crowdmapping, citizen reporting and mobile phone surveys are some of the methods used to engage and reach people whose voices are often not counted, or who may face barriers to accessing public consultations.

As well as creating a rich harvest of insights, these three key collective intelligence methods can play an important role in growing the capacity of citizens and distributing power. 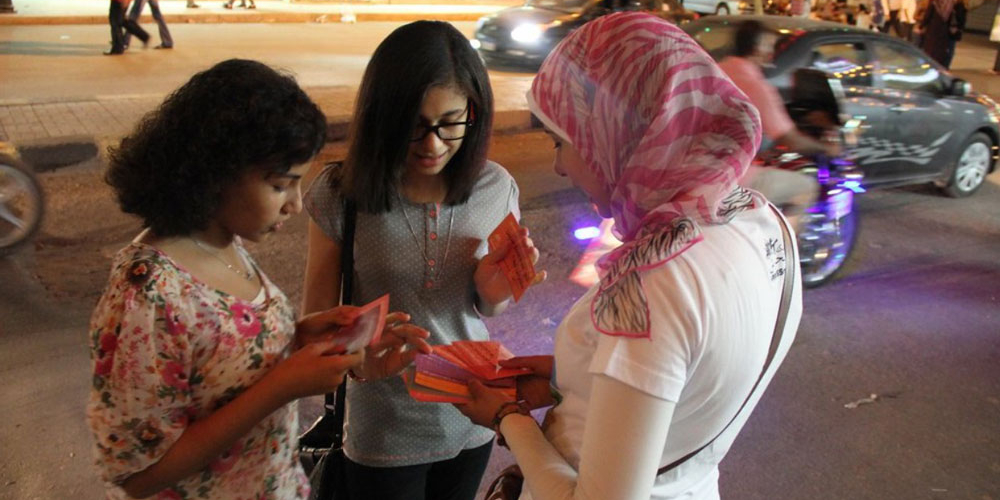 Citizen reporting and crowdmapping are being used to expose the scale of problems like sexual violence that affect large numbers of women globally, but often go undocumented. It’s well known that a persistent lack of gender disaggregated data makes women invisible in national statistics, and means that many of the issues they face go uncounted and therefore unaddressed in policy agendas. But this is also true for people living with disabilities, indigenous communities and LGBTQI populations. As more development decision making becomes data-driven, it’s important that efforts are accelerated to involve diverse communities in generating and using data to make decisions and hold others to account.

HarassMap is a non-profit initiative that crowdsources reports from women in Egypt about sexual harassment and abuse using the Ushahidi platform. They use the data to challenge stereotypes that blame the victims of harassment, build campaigns to convince people to take action and help create zero-tolerance of sexual harassment in schools, universities and workplaces. Safecity does the same in India and Kenya, digging into trends related to the types of violence or location to design appropriate interventions.

Citizen reporting methods are also being used by young people living with disabilities in Kenya, Zambia and the Philippines as part of a partnership between On Our Radar and Leonard Cheshire. They monitor progress towards the SDGs by documenting their experiences on their mobile phones. The stories are uploaded onto an online reporting hub. This evidence is then used by disabled people’s organizations and youth with disabilities to inform their advocacy for more inclusive policies.

The Geochicas’ Las Calles De Las Mujeres uses crowdmapping to discover and visualize the absence of female figures in street names in Latin American and Spanish cities, as well as highlighting the historic contributions of women. By bringing together a common technical and social infrastructure for addressing gender data gaps, Geochicas has created a global peer-led community of activists. As of 2019, the movement had more than 190 crowdmappers from 22 different countries.

The high penetration of basic mobile phones and technologies like radio are also being used to crowdsource views and experiences from traditionally overlooked groups, such as those in conflict zones or communities affected by poverty and illiteracy.

To overcome this, UNICEF launched U-Report, a mobile messaging program, in 2011. It gathers opinions and information from young people using polls and allows them to report issues. It operates on numerous social media, messaging and SMS channels, and is now active in 68 countries with 11 million users. The data and insights are shared back with communities and communicated to policy makers who make decisions that affect young people.

To better understand the perspectives of people in remote and hard-to-reach communities, Africa’s Voices, UNICEF Somalia, and Media INK designed five interactive radio shows on gender and child protection issues. The themes included female genital cutting and child marriage. Over 40,000 text messages were received in response to questions posed during the shows, with over 45 per cent of these coming from women and girls. The insights from the responses are now informing UNICEF’s social norms work and its messaging around social change.

Also making use of radio’s wide reach, in 2015 UN Global Pulse Lab Kampala designed a prototype AI tool that analyzed data from call-in shows on Ugandan local public radio stations. The team developed three NLP models to convert speech to text through speech recognition and translation between English and the regional languages Luganda and Acholi. The tool automatically tracked trends in the use of terms relevant to the SDGs, delivering key insights on health service issues, the arrival of refugees and local crises. The project provided a valuable proof of concept that citizen-generated audio contains unique information that is of use to governments and development organizations. It is now being scaled to other countries.

Phone polling has also provided important evidence for journalists investigating land grabs in South Sudan. To uncover the truth, journalists Carloyn Thompson and Lagu Joseph Jackson designed a mobile phone survey which was distributed through random dialing on a national network, and pre-recorded in six local languages. Respondents could answer by pressing numbers on their phone, and in some cases recording a message. The result of the investigation was published on Al Jazeera in 2019, and led to discussions in the South Sudanese community around land rights as part of the peace agreement.

As AI becomes more pervasive, it’s important to ensure that the technology does not exacerbate existing inequalities. Collective intelligence methods are also being used to create an alternative and more inclusive AI-enabled future. Developing training datasets for machine learning models that are more representative of the diversity of real-world experience is a vital first step.

Mozilla’s Common Voice project, for example, uses an accessible online platform to crowdsource the world’s largest open dataset of diverse voice recordings, spanning different languages, demographic backgrounds and accents. Common Voice aims to open up the AI market and stimulate the development of AI voice assistants that are able to serve the needs of more diverse communities. Other projects focus on a smaller subset of languages; for example, Siminchikkunarayku and Masakhane focus on Peruvian and regional African languages respectively. These projects recognize that developing AI systems based on under-represented languages and voices helps to preserve and increase the reach of cultural heritage. The resulting AI systems are also better able to serve the needs of these groups, who would otherwise be excluded.